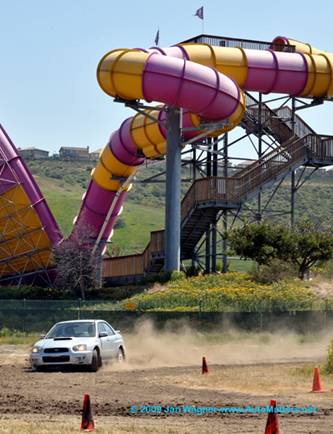 On April 4th, 2009, SCCA San Diego Region held a RallyCross in a large field used for overflow parking at Knott’s Soak City Water Park in Chula Vista, CA. This was the second RallyCross at this location, and the first this year.

The goal for this event was to offer a safe and fun venue for participants at all levels of skill to experience rally. A grader carved out the course, volunteers removed the rocks and boulders from it and a water truck kept the dust down. The on-track action was intense for entrants and spectators alike.

Vehicles were divided into a number of classes, based upon whether they were front, rear or all wheel drive, as well as their level of preparedness. Convertibles were allowed, but they were required to have factory (OEM) hardtops. Open cockpits (even with rollbars) were not allowed. For future events, thought is being given to exhibition classes that might include buggies, pre-runner trucks and other popular enthusiast vehicles like that.

Each competitor was given the opportunity to take four runs in their heat. Two of those runs were taken in one direction, followed by two runs in the opposite direction. The times were totaled for all four runs. If drivers had a major mechanical problem or failed to complete a run for some other reason, ten seconds were added to their slowest time to provide a time for the missing run.

It was interesting to note that the driver with the quickest individual run time (75.452 seconds) in class SR (Stock Rear Wheel Drive) came in second in class, because he had a greater four-run total time. Consistency seems to be an important factor in RallyCross.

Bret has years of experience designing Solo courses (for paved surfaces). In RallyCross, how well the course flows, how the corners are shaped and the type of dirt all factor into course design. Course design for RallyCross is especially critical because of the surface degradation.

Learning how to prepare the surface has been a real learning exercise. In spring the surface of the field might be three feet deep in weeds, whereas after a summer season full of use as an overflow parking lot, it would likely be covered in dry, hard dirt. For last year’s fall RallyCross, they did not saturate it with enough water, so the course became very dusty.

As the faster, more aggressive cars came through, they tore up the surface and exposed big rocks – from grapefruit size up to bowling ball size. Many of the corners deteriorated badly, but the tractor they had rented – a skip loader, was not able to keep up with filling in the ruts and removing the rocks. By the end of the day, the entire area on and off the course, “looked like a lunar landscape.” Some of the exposed rocks were so big that it took two people to lift them. They’ve learned how to read the surface, to predict where there is likely to be rocks underneath. Where it is soft is likely to tear up quickly. They’ve also learned to bring along more capable earthmovers.

Natural terrain helps to make RallyCross courses interesting, but safety is of paramount importance. That is why there were no bumps on course to cause vehicles to get airborne.

While Soak City provides a great site for RallyCross, it is only available in the park’s off-season. That is why this event will be the last one held here until the SCCA National Challenge Championship West RallyCross, which is tentatively scheduled for the last weekend of September (Sept. 26 and 27).

Until next time, if you have any comments or suggestions, please send an email to me.