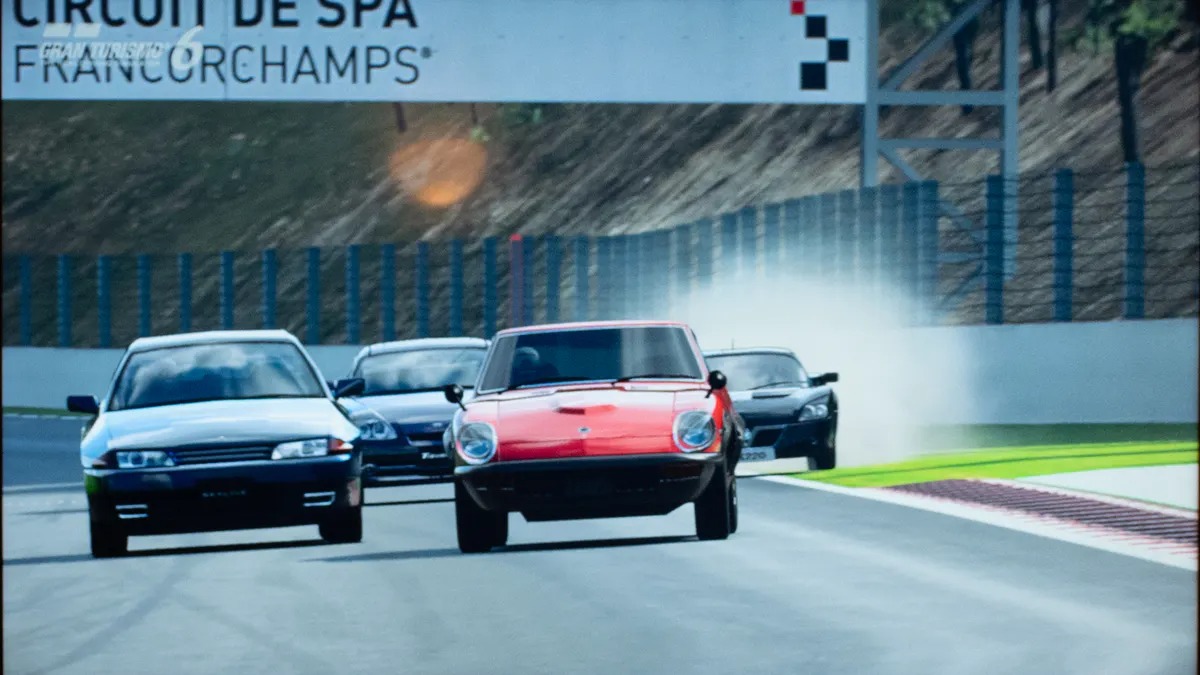 Screen shot of racing at Spa-Francorchamps, from GRAN TURISMO 6 on the PlayStation 3. That's me in the lead in the red 1971 Datsun 240ZG!

SIM RACING TECH — THE DIFFERENCE BETWEEN FINISHING FIRST & AT THE BACK; PLUS STUNT DRIVING

Enthusiastically d​riving the Coronavirus Pandemic away!

As race fans and drivers know, the difference between coming in first and bringing up the rear of the pack can be measured in seconds. Even ‘slow’ Formula One race cars are blindingly quick, but not in comparison to the cars that win consistently. Often it is the fine details that make the difference.

It is also that way with sim racing tech. At first glance, the Logitech G29 Driving Force racing wheel and pedals appear to be very similar to their G27 predecessors, and in many ways they are. The plastic shell that houses the steering wheel and buttons looks identical, as do the pedals —with the exception of a red plastic shaft supporting each of the G27’s pedals, versus black plastic shafts on the G29. However, upon closer examination, there is a difference, and that difference can lead to more successful racing.

The G27’s brake pedal provides equal, linear resistance throughout its travel. As I used it in GRAN TURISMO 6 (PlayStation 3), to race laps at Willow Springs International Raceway in California (a track that I have driven)…

… and at the Circuit de Spa-Francorchamps in Stavelot, Belgium (site of last weekend’s Formula One race), I continually messed up my braking and pushed off of the tight turns because of the serious lack of brake pedal feel and resistance. In a real car, I have to push progressively harder on the brake pedal to increase the stopping power, but the G27’s brake pedal quickly moves all the way to the end of its travel. As a result, I was rarely able to apply just the right amount of braking. In my two-lap races, I finished at the back of the pack.

Then I uninstalled my G27 and unboxed the G29 Driving Force that Logitech G sent me to review. I installed everything, including the optional Driving Force shifter, in the exact same rig. About an hour later I was racing again.

This time I could feel increasing resistance in the brake pedal as I pushed it harder – much like I experience in real driving. I hardly ever overshot the sharp turns. Instead, I was able to slow down just enough (usually) to maintain whatever lead I was building up.

My two laps were still a little messy, but shortly before the end of my second lap around Spa I took the lead and crossed the finish line in first place! I was so excited as I reached for my camera to take a picture of the results scoreboard that I literally fell out of my racing seat!

For more information, and to learn about the G923 with next-gen force feedback, visit: www.logitechg.com/en-us/products/driving.html

Yesterday I watched a great driving video on YouTube that I’d like to share with you. Before the land was cleared to make way for the construction of “STAR WARS: Galaxy’s Edge,” Disney’s Hollywood Studios at Walt Disney World in Florida had daily stunt driving shows. Living on the West Coast, I’ve only been to Walt Disney World once, and I’d not seen that show – until yesterday, when the Disneyland Fan Club Meetup Group that I belong to screened a YouTube video of the final performance (on April 2, 2016) of the “Lights, Motors, Action! Extreme Stunt Show.”

This incredible show, filled with surprises, demonstrates how chase scenes are filmed for the movies and T.V. Numerous stunts — several with pyrotechnics — are performed by professional international stunt drivers driving specially modified cars, riding motorcycles, and even riding jet skis. Just when you think it could not get any more incredible, it does.

Be sure to watch this video right up to its breathtaking finale – and then stay for the tear-inducing cast and crew farewell. Here is a link: youtu.be/FzpsyGMIZ4s

I understand that there is a version of this show at Disneyland Paris. Have you seen it? How does it compare to the Florida version? I want to see it live!