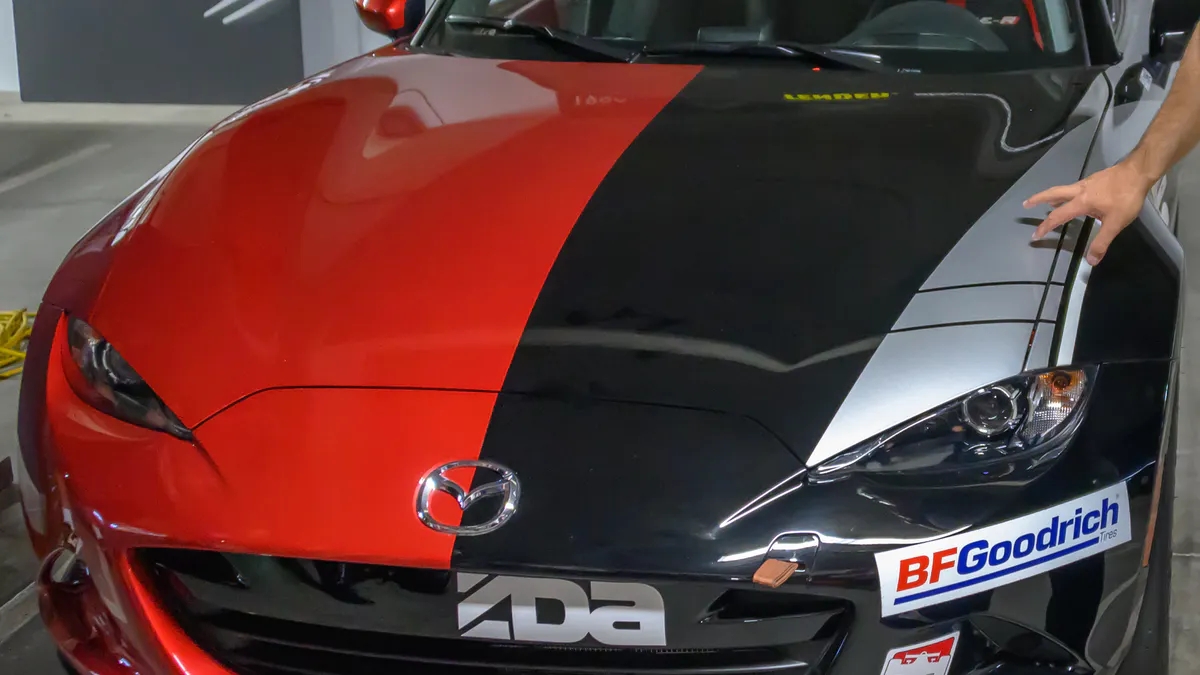 Mazda’s Heritage Collection occupies a spacious garage beneath Mazda North America’s Research and Development Center in Irvine, in Southern California. Occasionally enthusiast groups are invited to take private, guided tours to see and learn about this collection of very special vehicles. Recently I joined a group of MX-5 Miata enthusiasts who travelled all the way from Alberta, Canada on a tour of Mazda’s Heritage Collection.

Mazda’s Mo Murray was our guide.

This is not a museum. It is a working garage with cars that are historically important to Mazda. As was explained in another invitation to tour the Heritage Collection from the San Diego Miata Club, “the cars are driven as regularly as possible. Maintaining each vehicle is more than just applying a coat of polish or a routine oil change. All of the vehicles are maintained to illustrate Mazda’s long history of building great vehicles and the challenger spirit that lives in our motorsports program.”

“Vehicles you might see in the Heritage Collection include a 1967 Cosmo Sport, the original three MX-5 Miatas that debuted at the 1989 Chicago Auto Show, a 1988 RX-7 10th Anniversary, the last RX-8 ever produced and much more.

On the motorsports side, racecars such as the 767B, 787, RX-792P, RX-7 IMSA GTU and 1995 RX-7 Bonneville can be found in the collection – some of which were raced on the track as recently as this year’s Rolex Monterey Reunion at Laguna Seca.”

We learned from Mo that next year is the hundredth anniversary of Mazda. It began in Hiroshima, Japan as a cork manufacturing company. To move the cork around the factory, they built three-wheeled trucks. The trucks were so popular that Mazda started producing them for others. That is how they got into automobile manufacturing.

Towards the end of World War II the atomic bomb devastated Hiroshima, but the city’s topography was hilly. Mazda was protected by one of those hills, leaving its facilities relatively intact. Within a couple of days Mazda put their little trucks to work, ferrying people out of the city and supplies in. They became very much a part of the recovery effort. From the ashes of Hiroshima, that was the start of Mazda’s never stop challenging spirit that drives Mazda today in racing, product development and design. That is part of Mazda’s DNA.

In the 50s the Japanese economy began to recover. There were many car companies in Japan – so many that the government decided that there were too many. Since they could not all survive, the government decided that they would be consolidated into just three. Mazda was not one of them. The others were told that they would be absorbed into one of the three car companies.

With a company philosophy of not accepting defeat, Mazda determined that they would find a way to continue, to never stop challenging. The government of Japan asked for a compelling reason why Mazda should continue to exist.

To do that, Mazda went out and bought the automotive license for rotary engine technology from Wankel – a German company. That was enough for the Japanese government to say that Mazda now had a reason to exist.

Mazda has three design studios around the world. One of them is located at Mazda North America here, in Irvine. The others are in Germany and Japan.

Today Mazda has just a two percent share of the automotive market. They believe that if Mazda were a 10% market share company, it would destroy who they are and what they stand for. They are not looking to take on Toyota and Honda. Instead they seek to fill a niche that is special to Mazda.

For those people who feel that a car is a tool to get them from A to B, a Mazda is not for them. Mazda builds cars for people who love to drive. They believe that driving a car can be an uplifting experience, and that the role of every human is to uplift other humans.

We spend so much time in our cars. Expressed through their designs and performance, Mazdas are all about giving people that window of time when life is good. That is their essence. Driving a Mazda changes your attitude. That is the joy of driving.