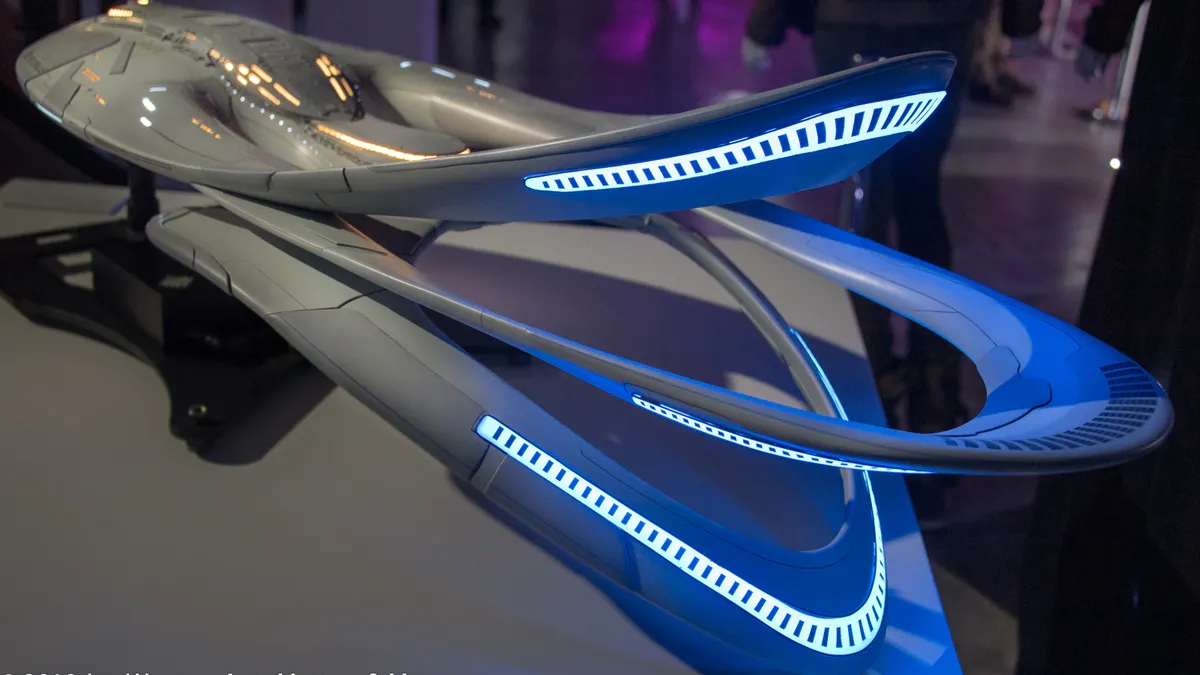 “THE ORVILLE,” COMIC-CON & ONE MAN’S JOURNEY TOWARDS DESIGNING VEHICLES FOR THE ENTERTAINMENT INDUSTRY

In movies and television, the future is only limited by the imagination.


Since there is so much to see at San Diego Comic-Con, and never enough time, each year I try to prepare by reviewing the massive volume of advance materials. Unfortunately, that never happens because instead I spend much of my time scrambling to write and produce a new “AutoMatters & More” column each week.

This year I was fortunate to discover The Orville Experience – an “off-site activation.” That is where commercial entities (often movie or T.V. production companies) swoop in to temporarily transform vacant nearby commercial properties (either empty lots or in buildings) into elaborate recreations of scenes from movies and T.V. series.


The Orville Experience was an offsite for “The Orville” T.V. series: a brilliant, optimistic, science fiction “comedic drama” set about 400 years in the future. Seasons one and two were on Fox.

Created by and starring Seth MacFarlane, it is reminiscent of the original, late 1960s “STAR TREK” T.V. series, but with decades-newer, exquisite visual and practical effects; large and elaborate sets; and a magnificent cinematic look. Each week the diverse human and alien crew of the Orville embark upon new adventures as they explore the vast reaches of space and encounter other beings.

Costumes and props from “The Orville,” and the highly detailed shooting model of the ship itself, were on display at The Orville Experience.


Seth MacFarlane and many of the cast members, along with costumed aliens, visited there one afternoon, posing for photos with fans while copies of the hardcover book “The World of the Orville” were distributed.

To create and produce episodes of “The Orville” at such an elevated level requires a tremendous amount of time and resources. To do so for season three in time to meet Fox’s scheduling needs was not possible, so this next season of “The Orville” will move to Hulu – probably in late 2020. That lengthy delay will give Seth the time that he needs to take “The Orville” significantly beyond where it is now.


On Hulu, the length of episodes of “The Orville” will no longer be limited to a one-hour with commercial breaks format on free broadcast T.V. Scenes, shots and storyline material will no longer need to be cut due to insufficient air time. Furthermore, the move from mainstream network T.V. to a streaming service will enable the creative team to venture beyond the more restrictive adult content limitations imposed on T.V. broadcasters, so the stories will have the potential to better reflect the full range of human – and alien – behavior and interactions.


At The Orville Experience I met Lex Cassar, a Senior Concept Designer who works on futuristic visual design elements for “The Orville.”

He was there taking photos for visitors who posed with some of the actual prop weapons from the show.


As did I, Lex initially received his formal training in the industry in Canada, and then moved to the United States to further pursue his career. Whereas my initial field of study was writing and producing for television, his was art.

We also share an interest in automotive design, and our attendance at San Diego Comic-Con has helped further our participation in the entertainment industry.

Lex had travelled from Canada to California for an acting gig but then, about ten years ago while at San Diego Comic-Con, he came upon a booth for California’s world-renowned Art Center College of Design. That led to him taking night classes there, followed by admission into their entertainment design program.

While at Art Center, Lex met and worked alongside several people who are well known and respected in the entertainment industry – among them David Levy. David invited Lex to work with him on a 2014 short science fiction film pilot entitled “PLUG” (watch at vyle-art.com/plug/), which was set in post-apocalyptic Earth. Lex acted in that film and designed a practical dune buggy for it.


Later, David invited Lex to work with him as an art department intern on Ridley Scott’s 2012 film “Prometheus,” alongside Ben Procter and Steve Messing. Lex was given the opportunity to help design the treaded ATVs seen in the film.