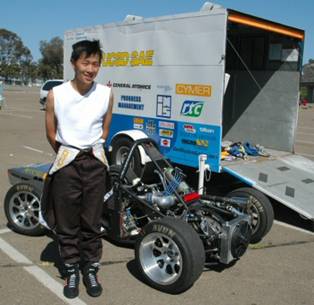 Recently an unfamiliar entrant participated in one of our Sports Car Club of America (SCCA) autocrosses at San Diego’s Qualcomm Stadium. He caught my attention because of his car – which was an open-wheeled race car (expensive red Ferraris and quick Miatas also tend to attract my attention). Curious, I asked the driver about it. I found out that it was a car designed and built by several University of California at San Diego (UCSD) students. It was their most recent entry in the annual Formula SAE (Society of Automotive Engineers) competition in Detroit.

What a neat idea for a car enthusiast wishing to further his or her education: go to college and use what you learn to design and build a winning race car. I had to learn more.

The national organization, sponsored by DaimlerChrysler, Ford Motor Company and General Motors, describes Formula SAE this way on their Website:  “Students design, fabricate and compete with small formula-style race cars. Restrictions are placed on the car frame and engine so the students’ knowledge, creativity and imagination are tested. Four cycle engines up to 610cc can be turbocharged or supercharged to add a new dimension to the challenge of engine design.” “The vehicles are judged in three different categories: static inspection and engineering design, solo performance trials and high-performance track endurance.” The events are held each May in Detroit.

The “Students… Start your Engines!” story in the news archive for the UCSD Jacobs School of Engineering Website (www.jacobsschool.ucsd.edu/students) is a good introduction to UCSD’s Formula SAE program. The goal of the students is to participate in the annual Formula SAE competition in Detroit. UCSD students have already done so several times. This is a major undertaking but with great potential rewards. Students and their work are on display in front of potential employers in Detroit. That represents a terrific career opportunity.

The UCSD Formula SAE homepage (http://sae.ucsd.edu) will direct you to pages that provide much more information about the program, including the program’s history, member profiles, photos and sponsorship. Links to additional reference Websites can be found at the Formula SAE Website (www.sae.org/students/formula.htm).

Here is a more detailed breakdown of this year’s all-encompassing competition: “The group will be judged in eight categories: a 22 km endurance event and a timed autocross event on a track defined by cones; fuel economy; skid pad; a 0-60 mph acceleration test; an engineering design critique; an oral presentation to pitch the car design to a fictitious manufacturer; and a final cost report analysis by industry experts.”

Aside from learning about automotive design, engineering and construction, participation in Formula SAE also teaches the nearly 30-member student team about business. They operate as a business and conduct themselves accordingly. In their pursuit of sponsorship, students make their pitches to everyone from individuals to decision makers at corporations.

According to Micah Bayless (President and studying Aerospace Engineering): “We have to be fully self-sufficient, whereas schools like Michigan State, Cornell and Rensselaer are running on annual budgets of nearly $30,000 apiece to develop their cars.” These worthy and hardworking UCSD students are very dependent upon sponsorship from our community.

Bayless added that one goal for this year’s car was “to incorporate the clean-burning ethanol E85 fuel into their design.” I noticed that the list of sponsors includes San Diego’s Regional Transportation Center, and that they provided E85 Ethanol fuel. You may recall a recent “AutoMatters” column in which I discussed the variety of alternative fuels pumped at the RTC fuel station — part of Pearson Ford’s state-of-the-art Regional Transportation Center (on El Cajon Blvd.).

There are additional, challenging opportunities for Formula SAE students to put their cars – and their skills, to the test. According to Formula SAE Student Central, “the Sports Car Club of America (SCCA) has created a class specifically for formula cars built to conform to the requirements of SAE’s Formula SAE® student design competition. Entrants in this class will compete for the first time at the Tire Rack® SCCA Solo National Championships in Topeka, Kansas.” That opportunity is another good reason to practice at our local autocrosses – and in so doing expose us to a UCSD Formula SAE car.

I asked if his Celica exhibited understeer versus oversteer for the Formula SAE car. To that Charles laughed, saying: “Oh yeh, oh yeh, we’ve got GROSS oversteer – but fun oversteer!” For those of you who may not be sure what that means, when a car is said to understeer it has a tendency to not turn as sharply as you’d like (forcing you to slow down to be able to make turns), whereas a car that oversteers wants to slide out at the rear (it has a tendency to spin at speed).

He went on to add: “My Celica is classed in H Stock, which is the absolute slowest class there is, and the Formula SAE is just under A Mod, which is the second fastest class.” Our SAE car has about 62 horsepower. It’s about 585 pounds. With the driver it’s a little over 700. My Celica has 130 horsepower but then it weighs about 2900 pounds.”

“There’s a lot of automotive guys from GM, Ford and Chrysler because it’s in Detroit. What they do is they receive the cars and they start scoring them. They give points based on how well you can justify your car and how it’s built.” “You explain to the judges, like we’re explaining to each other, how you went about that process and the concept that’s behind it.” “It’s required by the Formula SAE rules to build a new car every year.”

“There are teams that have been in the competition for about 24 years, and so they of course have the experience and all these cars to build upon. They usually place in the top 25% but sometimes they drop back a little bit. For everyone currently on (our UCSD) team, this is their first year. There was a team in ’97, a team in ’98 and a team in 2000. In ’97 and ’98 they actually went to competition but in 2000 they didn’t have enough funds to make it there. Since then there hasn’t been a team until our team.”

“We placed, I believe, 78th out of 140. It’s about middle of the pack. The same problem we were having today was that the clutch was giving out. That’s what put us out of the endurance, which is 35% of the overall points, so we’re kind of missing that big chunk of our score.” “(Today) the first run was pretty slow because I couldn’t shift. The second run I just got a little too aggressive out there and I got lost on the backside, where I went up the hill.” Regarding his clutch-related difficulty getting started again, “it’s still kind of a rare problem. Not very many people have seen that problem before but basically we’re either losing pressure in the hydraulic lines or the master cylinder is either gunked up or kind of cocked to the side and so it won’t return itself. Basically the pedal gets stuck to the ground. You can’t shift, you can’t put it in neutral and you can’t restart it. What I did was I had to hook my foot on the bottom of the pedal to lift it back up and then pump the pedal again to build up some more hydraulic pressure. The first run I was trying to shift and it wasn’t working for me so then the second run I just tried to keep it in one gear.”

“Even community colleges – there were a couple actually, had cars. It’s not just the big public and private universities.”

As for Charles’ thoughts on employment opportunities, “a lot of the motorsports and the Big Three – GM, Chrysler and Ford, look specifically for Formula SAE experience.” “It really varies. There are guys at Ford, Chrysler, GM, Cosworth Racing Engines and Garrett turbochargers (Engine Boosting Systems).”

Charles appreciates the additional learning opportunities made available to him through his participation in UCSD’s Formula SAE program. He told me that: “I’m pursuing an Electrical Engineering degree. However, for the car I designed the frame and suspension geometry. I did most of that in Computer Aided Design. It’s more of a Mechanical Engineering type of thing to do. That’s one of the good things about the University of California SAE group. You’re exposed to so many different disciplines in a project.” “Another reason why I like this project and joined this student organization is because it’s really a hands-on project.” Charles seems to be an intelligent, articulate and enthusiastic young man. I suspect he will go far.