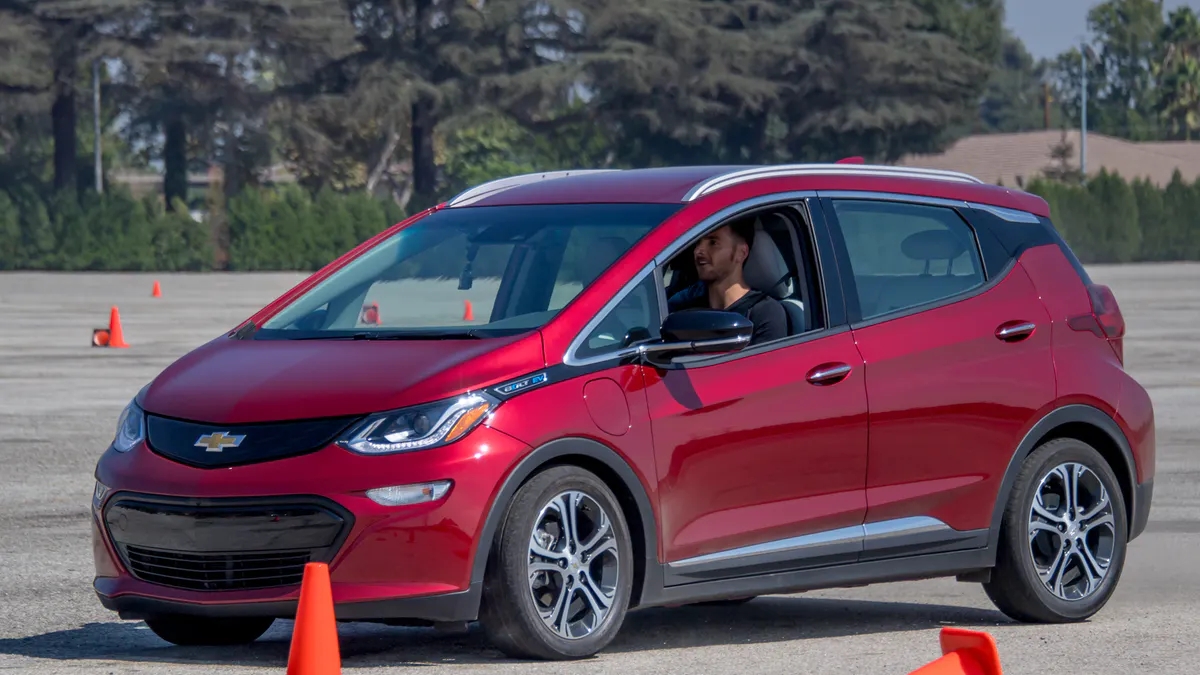 UNLEASH YOUR INNER SPEED DEMON WITH THE CHEVY BOLT EV

As the video shows, an autocross puts its handling to the test


Initially the decision to purchase an electric vehicle was mostly made by early adopters, but EVs have become more popular since then. EVs produce zero emissions and their cost to refuel is lower than that of vehicles with internal combustion engines. The effect of torque in an EV is sudden, producing quick acceleration from a standstill – and that acceleration is smooth.

For those of you unfamiliar with the term, an autocross is like a mini roadracing course. This closed course consists of a start line, a finish line, and a combination of straight sections and turns. It is typically delineated with soft plastic traffic cones (pylons), to minimize or hopefully eliminate the possibility of damage to vehicles if and when they exceed the boundaries of the course. The courses are designed to limit the likely speeds that the cars can go. They are often timed, so that drivers can compare their performance with those of their fellow autocrossers. Autocrossing places high demands on the driving performance characteristics of automobiles, including acceleration, braking and cornering.

Many participate in autocrossing for sport, but auto manufacturers often use autocrossing to give their prospective customers an opportunity to experience how their new vehicles perform, in a relatively safe and controlled environment.

Chevy wants to show us that their Bolt EV is more than just “a great car for those who want an efficient, eco-friendly ride with a long range.” By challenging us to “unleash your inner speed demon with the Bolt EV,” they hope to demonstrate to us that their “first fully-electric vehicle can hold its own in performance on a dynamic track.”


The event began with a brief presentation of facts and figures about the Chevy Bolt. Thanks to its regenerative braking system, which works to replenish the Bolt’s electrical charge during braking, it is possible to drive this car with minimal use of the brake pedal. The driver can control the intensity of regenerative braking applied with a switch.

Our low speed autocross course had a good mixture of turns as well as relatively straight sections to reveal the Bolt’s cornering, acceleration and braking, and the turns varied from gentle to sharp. The course was quite dirty and the old paved surface had become bumpy over time. Some of the Bolts had tires optimized for longevity and low rolling resistance, whereas others had more performance-oriented tires.

For comparison purposes, Chevy also brought along a VW GTI. Our runs were timed, so that we could see how we did in the various cars, as well as compare our performance to that of our fellow journalists. We were each given as many runs in each of the cars as we wanted to take.

The autocross provided a good opportunity to explore the handling characteristics of the Chevy Bolt. Especially due to the dirty, dusty track, the cars broke traction easily and often. The only way to recover was to slow down. However, it was the dips and bumps of the track that revealed something unexpected about the Bolt. In hard driving, the uneven road surface caused the Bolt to pitch and bound back and forth – an unfamiliar and rather unsettling experience.

In contrast, the VW GTI maintained its composure much better, which led me to have a much greater sense of confidence in that car’s handling capabilities. I did repeated laps in Bolts equipped with both kinds of tires, but the result was still the same.


In this video you can see for yourself how the Chevy Bolt handles on the autocross course, and how it compares to the competition (VW GTI).


As always, I look forward to hearing from you in the comments below.