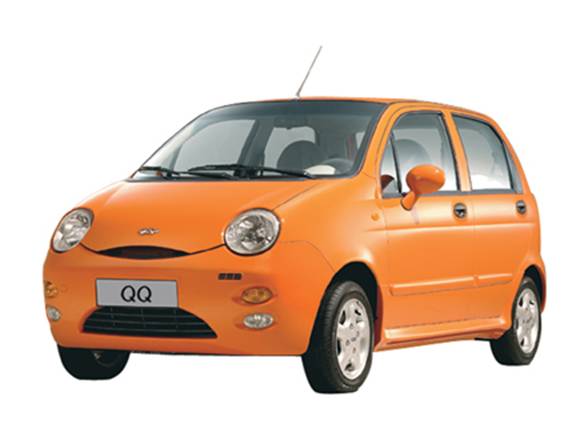 Will Your Next New Car be Made in China?

China is poised to sell us their automobiles. According to a July 11, 2007 Press Release on their Web site (www.cheryglobal.com), “Chery (Automobile Co.) . . . and Chrysler . . . will work together to develop, manufacture and distribute Chery-made small and sub-compact cars in North America, Europe and other major automotive markets under the Chrysler Group brands.”

According to Chrysler Group President and CEO Tom LaSorda, “this is the start of a very long relationship between Chrysler and Chery. Chery’s participation in this agreement and their focus on small and sub-compact cars will have a nearly immediate effect on Chrysler Group’s offerings in the small-vehicle segments.”

LaSorda certainly seems optimistic about this new relationship, but should we be? Concerns regarding the safety of consumer goods made in China for sale in the U.S. have been all over the news lately. Less publicized has been news about the safety of Chinese automobiles, as well as criticisms of how the Chinese auto industry chooses to compete and continued accusations of Chinese human rights violations. Read what Dan Koeppel wrote in his feature entitled “CLONE HOME” in the September 2007 issue of Popular Science magazine:

At the sweet spot of the Chinese car market are vehicles that sell for around $5,000. When you’re stuck in traffic, you’re surrounded mostly by the ruler in that category: the Chery QQ.

The QQ is a part-for-part reproduction of a car known, depending on where it is sold, as the Chevy Spark or the Daewoo Matiz (the genuine vehicle is built as part of a joint venture between General Motors and the Korean company). Sparks are sold all over the world—in the U.S., an upgraded $10,500 variant called the Aveo is cheaper than any other car you can buy. But when the $5,000 QQ first appeared in 2003, GM—and American officials—were astonished. “If you didn’t have name tags on the cars, you couldn’t tell them apart,” said Congressman James Sensenbrenner of Wisconsin after a 2004 trip to China. “It’s such a good knockoff that you can pull the door off the Spark and it fits on the QQ, so close that the seals on the doors match right up.” The QQ . . . now outsells the Spark in China by 5 to 1.

In his July 23, 2007 column in AutoWeek magazine, Steve Thompson reminded his readers that “China remains a state whose ruling oligarchy selectively grants and restricts freedoms” and “as AFL-CIO policy director Thea Lee pointed out in (a Washington) Post story, manufacturing workers in China make about 57 cents a day.”

Dan Koeppel continued with his report in Popular Science:

The Chery QQ demonstrates more than just the skill of modern cloning. It also illustrates the danger. Easy-fit doors and rearview mirrors aside, there are differences—scary differences—between the Spark/Matiz and the QQ. As news of the copycat car spread last year, a German automotive club conducted and videotaped a comparative crash test between the two vehicles. When the Matiz hits the barrier, the front end crumples. The rear of the car bucks upward and then thuds back to the ground. An impact chart shows serious yet nonfatal injuries to both the driver’s and passenger’s head and legs. The Chery hits the obstacle at the same speed. The rear end of the car lifts higher than the Matiz and begins to rotate. The driver-side door pops open. Hood, engine and roof crumple into the passenger compartment. The frame buckles, bringing the vehicle flat to the ground. On the impact chart, the driver’s head, neck and chest are . . . not survivable.

We’ve already seen major national recalls for dangerous Chinese goods: from poisonous pet food to children’s toys with lead in the paint. While I do not think that any of my large collection of 1:18 scale diecast automobiles have been included in the recalls, are we ready to buy actual Chinese automobiles and entrust our lives to them? Even when (not if) their safety and quality improve, will we be net better off if the real price includes our continued loss of many well-paying jobs?

I sincerely believe that it is in China’s best interests to work together with us to help address these and other challenges. Hopefully that will happen, sooner rather than later.