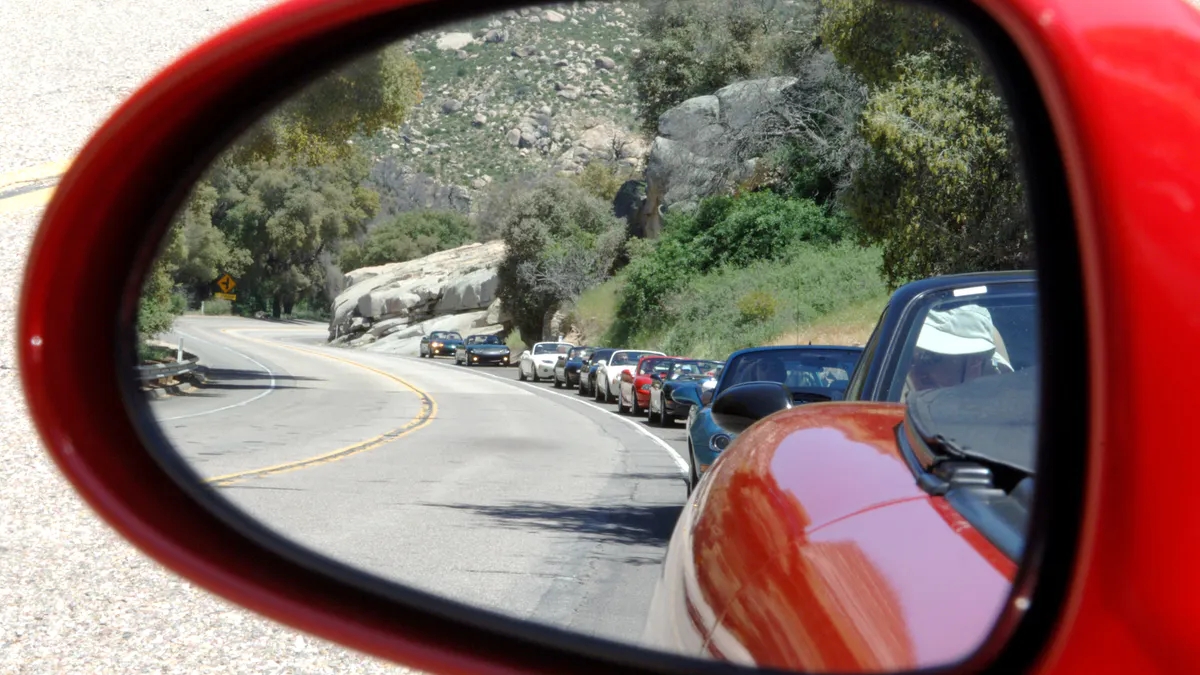 
Membership in an active, local car club adds greatly to the enjoyment of a car. Club runs are one of their most popular activities. Likeminded people who drive a particular make or model of car meet to go for a fun drive somewhere.

I’ve owned three Miatas (not all at once) in my lifetime. Then I decided that I wanted something brutally powerful, so I sold my Miata to buy a 2011 Mustang GT.

It has a beautiful red leather interior…

… and a 6-speed manual transmission.

It was a Pioneer Audio project car.

As much as I enjoy its power and space…

… driving it on public roads requires holding it back. To exercise its big, 412 horsepower V-8, it demands a race track, not public roads. Miatas, with their much smaller engines, can be driven aggressively while remaining within safe, legal speeds. I miss that.

With only about 14,000 miles, my Mustang GT is still like new, but I placed a deposit on another Miata (see AutoMatters & More # 577: Mazda MX-5 Miata 30th Anniversary Edition).

Sadly, I must sell my Mustang before that car arrives. As much as I would like to, I cannot have both.

In anticipation of taking delivery of my new Miata, I rejoined the San Diego Miata Club – to go to their well attended club meetings and get back on their email list, to find out about upcoming events.

Even though I’ve been away for almost ten years, I recognized many familiar faces at my first meeting. They recognized me too, and welcomed me back.

From the club emails I learned about several upcoming club runs. One in particular got my attention. It was to be a run to see the wildflowers bloom in the Anza-Borrego Desert east of San Diego, near the town of Borrego Springs. Due to the unusually frequent rains this past winter, we have a bumper crop of wildflowers in the desert – so much so that they have made the national news several times.

The only problem is, I do not yet have a Miata. I asked the run’s organizer if I could participate in the run in my decidedly un-Miata-like, 2012 Toyota Prius Plug-in Hybrid. Ken replied, telling me that “You’re welcome to come in an OTM (Other Than Miata) at the back, if you’d like.” It was settled. I was going.

To beat the anticipated crowds, we agreed to meet at 6:45 AM. Waking up to what looked like a beautiful day, I decided to leave my Prius in the garage and fire up the Mustang. The only problem is, it did not have the required full tank of gas.

At our drivers’ meeting, directions were distributed and volunteers agreed to be “sweeps.” They would follow our group, to shepherd any stragglers back to the route.


Even though my car had a big power advantage over the Miatas, I could not use much of that power because I needed to maximize my fuel economy. That is not easy to do with a big, thirsty V-8.

Our first stop was at the famous Dudley’s Bakery.

When we resumed our journey, the roadways transitioned from what had been relatively straight and flat to a seemingly never-ending series of very short straights followed by low-speed, tight turns on narrow, two-lane mountain roads. My Mustang felt too wide as I followed Miatas and avoided the rocks and vegetation beside me, on our way to the fields of wildflowers.

Once there, we stopped at several places shown on the Borrego Springs Flower Map.

Our customary group photo was taken by the head of a large metal sculpture of a serpent. Other nearby sculptures included a Jeep.

After we’d enjoyed the flowers, we caravanned to La Casa Del Zorro Resort in Borrego Springs, where we had lunch.


After lunch we commenced our drive back to San Diego. My car indicated less than 80 miles to empty, and the distance to our gas station stop (at Harrah’s Rincon Casino) would be 55 miles. I went into full fuel-saving mode, actually increasing my remaining driving range by another nine miles. A gas station never looked so good.