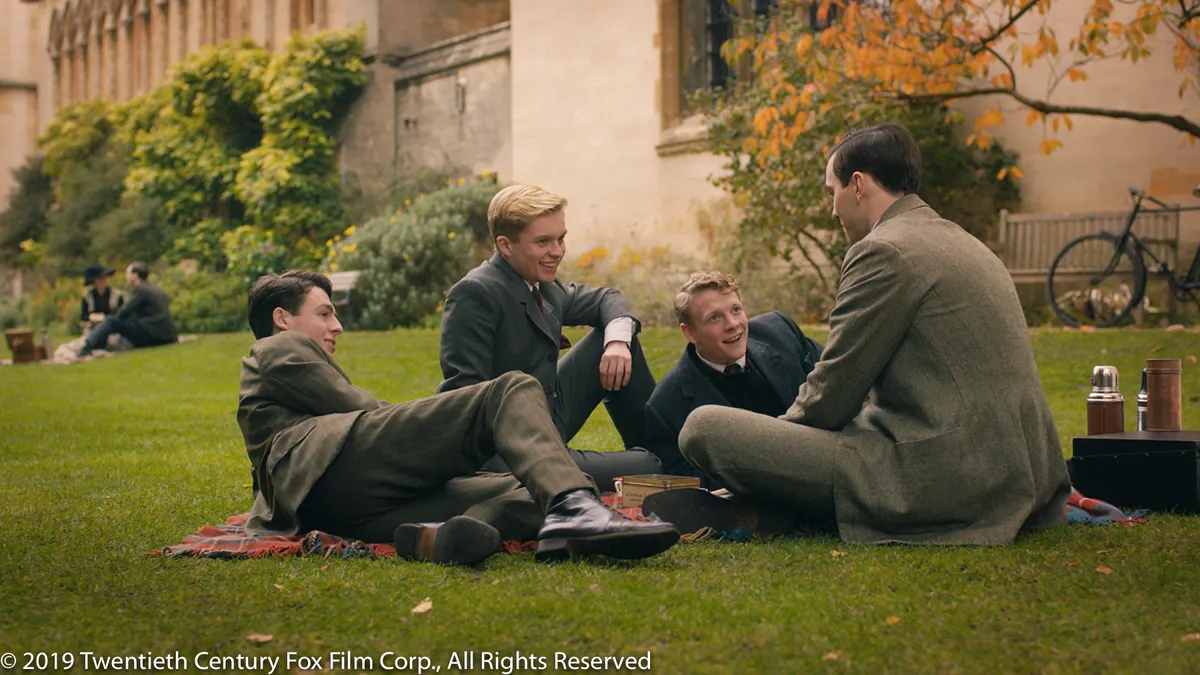 ”TOLKIEN” – THE FORMATIVE YEARS OF THE AUTHOR OF “THE HOBBIT’”

John Ronald Reuel Tolkien may be best known as the author of the books “The Hobbit” and “The Lord of The Rings” – rich, wonder-filled, intricately woven, epic and brilliant tales of fantasy and adventure. He envisioned and illustrated a world populated by wizards, hobbits, dragons and mythical beings that represent the best and most inspirational aspects of human nature, including our love of quests, self-sacrifice, strength that comes from camaraderie, and the hope that good, in the end, will defeat evil. He was a creative genius.

“Tolkien” (pronounced “TOL-KEEN”) paints an exquisitely visual and linguistic story, from childhood, of J.R.R. Tolkien. We learn about his transition from being an imaginative but sad loner, to becoming one of the most celebrated and beloved authors of fantasy that our world has ever known. His early life’s deeply tragic experiences, his artistic, creative talents and the unwavering support of his friends and mentors, helped mold him into a prolific and beloved author of a vast body of literary works. His is an inspiring story of one man’s courage in the face of potentially overwhelming adversity.

While knowledge of, and familiarity with, his vast body of work will no doubt give you an even greater enjoyment of, and appreciation for “Tolkien,” that is by no means a necessary prerequisite.

Insightfully directed by Dome Karukoski (of Finland, and a huge Tolkien fan from a young age), and written by David Gleeson and Stephen Beresford, “Tolkien” is set in early 20th century England, during the time leading up to, during and following World War One.

Tolkien was very young when his father passed away. The family had to leave their home in South Africa, which Tolkien loved.

Living in the literal and figurative darkness that they would endure in England, he was comforted by the wondrous tales of fantasy that were vividly and enthusiastically told to him and his brother by their loving and devoted mother. Her stories imparted to him an appreciation for, knowledge of and fascination with language and literature. Sadly, she passed at the age of 36 from untreated diabetes (there was no insulin at that time), leaving Tolkien and his brother as orphans to be cared for as wards of the Catholic Church, represented by Father Francis Morgan (Irish actor Colm Meaney, from TV’s “Star Trek: The Next Generation” and “Star Trek: Deep Space Nine”). Thus, orphaned at the age of 12, Tolkien would have to overcome the potentially devastating adversity of losing both of his parents, being penniless and far from his native South Africa.

Tolkien (Nicholas Hoult) found strength and motivation from the unwavering support of a fellow orphan named Edith Bratt (talented English-American actress Lily Collins, daughter of musician Phil Collins), with whom he would fall in love…

… three dear friends and fellow artists: Robert Gibson, Christopher Wiseman and Geoffrey Smith who, together with Tolkien formed a brotherhood and a secret club that they called the “Tea Club and Barrovian Society” (TCBS) to change the world through the power of art…

Contrary to what one might expect, given the horrors and utter brutality of WWI trench warfare that we are shown in disturbing detail, “Tolkien” is on balance a beautifully crafted, deeply emotive movie that will lift up your spirits and give you hope for the future, no matter how bleak a prospect that may seem at times.

To see a trailer, visit www.foxsearchlight.com/tolkien/.