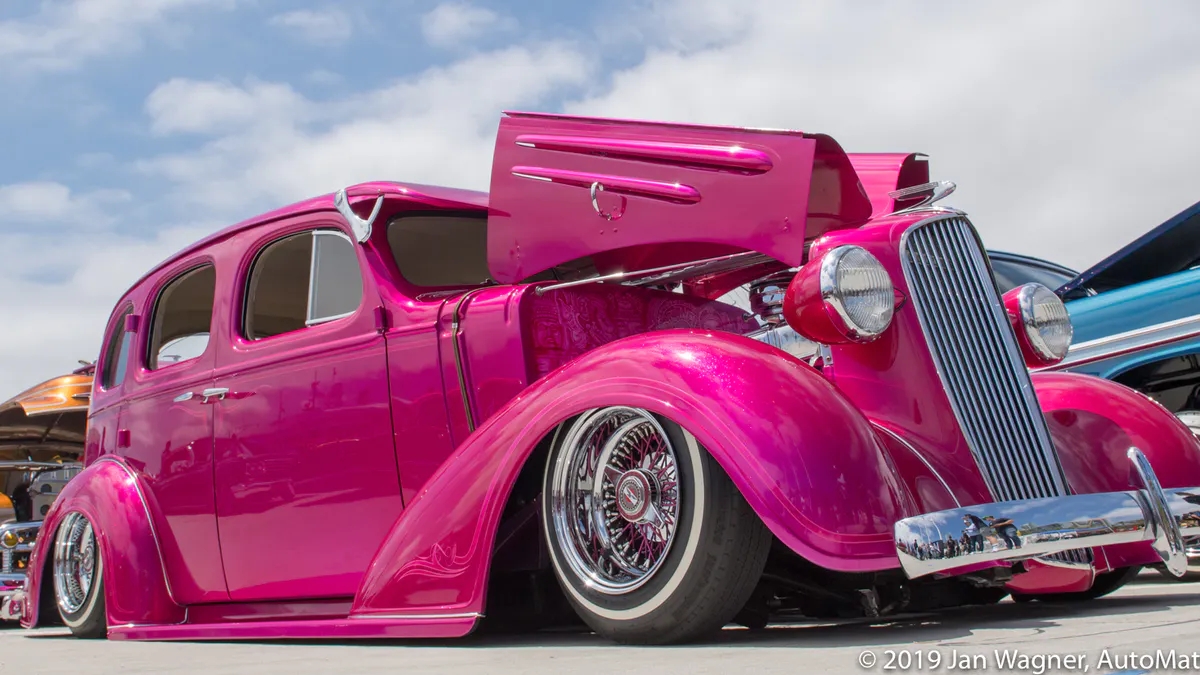 L​owriders glistening in the SoCal sunshine, plus SKATEBOARDING!


We are truly spoiled here in Southern California. We might sometimes take our comfortably warm, sunny weather for granted but people from around the world travel here to spend their precious vacations.

Back where I moved here from long ago (Alberta, Canada), we had only a few months of sunny, warm weather, and the mosquitos somewhat spoiled that.

In good weather, people are far more inclined to bring out their prized automobiles to share with us at many enthusiast-supported, specialty car shows.

Recently I had the pleasure of discovering one such specialty car show as I happened to walk by where it was about to happen. According to the event poster and graphics, it was called “Legacy,” in celebration of 30 years of Tribal Streetwear.

The cars were lowriders: unique and beautiful, colorful, low-to-the-ground, engraved-chrome examples of rolling vehicular art. Not even needed was a demonstration of their capability to independently raise and lower their four corners on their suspension. It was enough just to admire and enjoy them as art.


Adding to the breathtaking exhibition was the location of this event. It took place next to downtown San Diego, on the Broadway Pier, across from the fascinating USS Midway Museum and several other noteworthy vessels.

On the north side of the car show were two Japanese naval vessels visiting San Diego on their “Overseas Cruise 2019.” Watch for coverage of their shipboard tour, provisioning the ships and more in a future “AutoMatters & More” column.

In addition to the lowriders, there was an art show, the art of tattoo, vendors, DJs, food trucks and more…


… as well as thrilling skateboarders performing for us on a large half-pipe. It was set up right next to the water – where a misstep could easily have resulted in a skateboard flying over the pier and into the dark depths of the Pacific Ocean, where it would likely remain!

Disney – Pixar has made a rare goof by not including the motorhome in their online movie posters for “Toy Story 4.” Speaking for auto enthusiasts everywhere I must say that the motorhome is the vehicle that drives this movie!

The premise of this, the latest installment of the popular “Toy Story” franchise, is that Buzz Lightyear travels far from home on a road trip – in the aforementioned motorhome. Along the way he makes new friends and encounters some adversaries.

Andy has already gone off to college, so the toys are now in the care of Bonnie, a friend of the family who is about to begin kindergarten – a potentially scary prospect for a little child. She used her imagination to create a new toy named Forky. Forky began life as a plastic fork. Surely it was not easy giving an endearing personality to a plastic fork, but Pixar has done just that.

You might recognize famous and familiar names in the voiceover credits. Tom Hanks provided the voice of Woody, along with Tim Allen as Buzz Lightyear, and Annie Potts as Bo Peep. New character Forky was brought to life by Tony Hale. John Ratzenberger returns as Hamm. In the credits you might even spot the truly legendary Mel Brooks (born in 1926 and still going strong), Betty White and Carl Reiner!

It should come as no surprise that Pixar surely has created yet another hit. It has all the necessary ingredients and really, who would not love Forky – an unassuming, comical little disposable plastic fork that was decorated with the love of a child?

However, times they are a changing, and there is news on the recurring character front that might cause concern for fans of “Toy Story.” At this time, we can only wait and wonder to see what will be revealed next, in “Toy Story 5.”

In the meantime, to see the official Disney – Pixar trailers for “Toy Story 4,” and to find out more, visit: movies.disney.com/toy-story-4.